When One Door Closes Another One Opens

For December Valerie is our hostess over at Art Journal Journey and her theme is When One Door Closes Another One Opens. We can interpret the theme how we wish using doors.

I had an idea in mind but since I am not that great with my own sketches or paintings (yet-hope to improve) I grabbed my Ideals magazines and looked for what I could use.  One issue had several different illustrations with doors. I grabbed one, and from another page I cut up parts of it to use as well. I also first looked online for rubber stamp images of doors and found one I liked.  Reminded me of a hobbit door, or a garden door.

I printed that door image off and used my watercolors and water brush. Then also used my pencils to highlight  flowers. For the back of the door I covered it with packing papers that I save for mixed media pages. Since I was using watercolors on regular copy paper I needed to strengthen it a bit  I hope you like my page, I am happy with this one.

Opening doors to kindness. Thought perhaps the lady opening her door and seeing a young boy sharing flowers lifted her spirits. Perhaps she was sad and opening her door she found happiness. 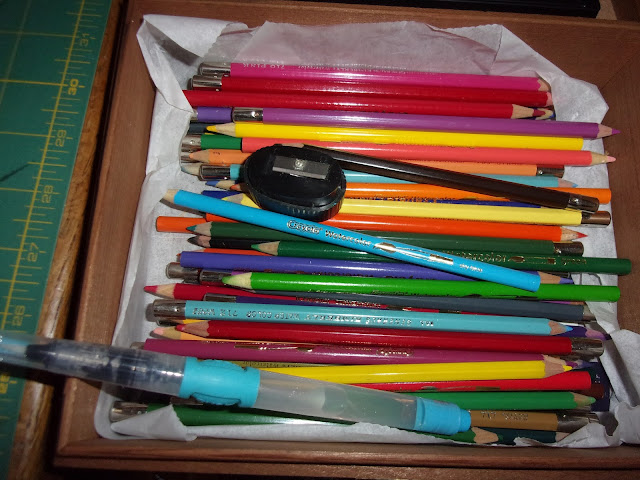 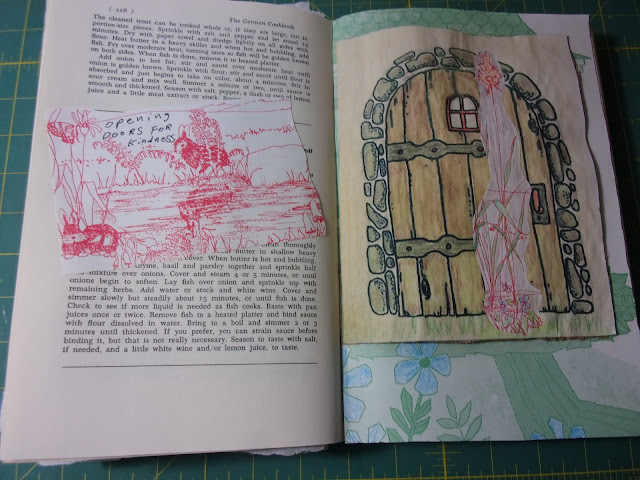 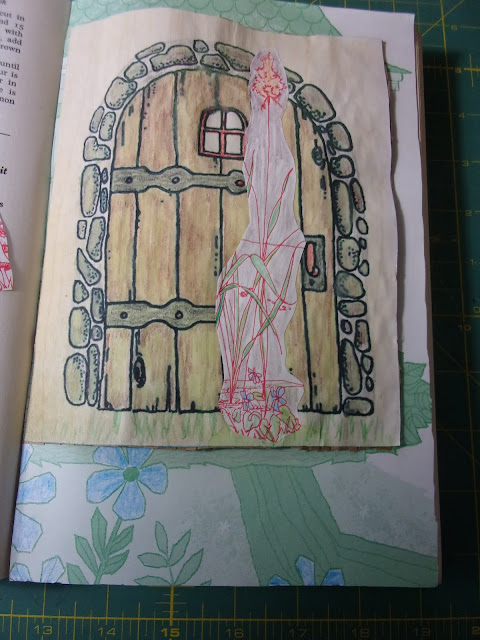 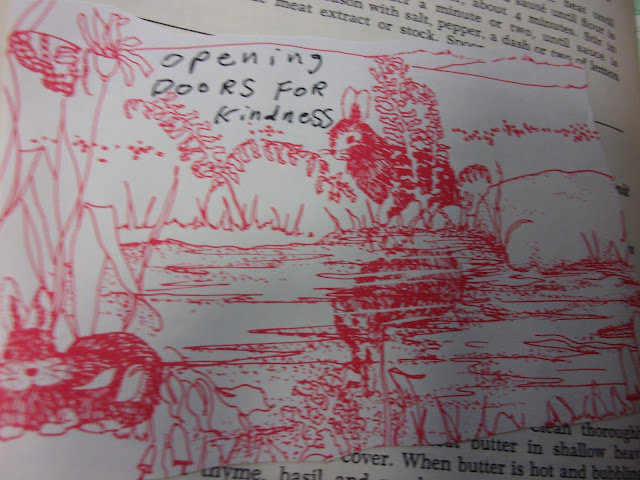 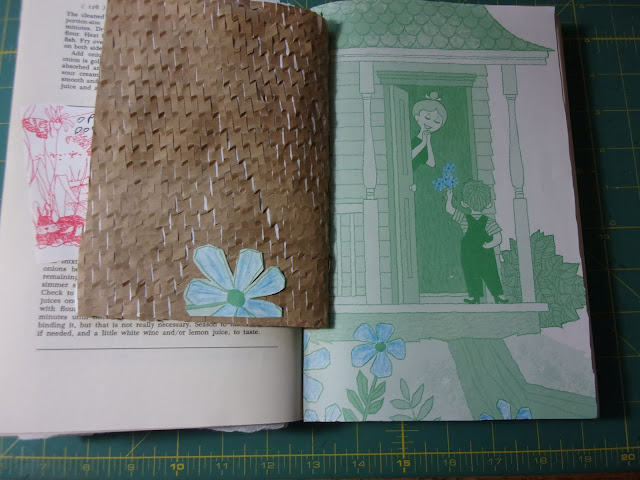 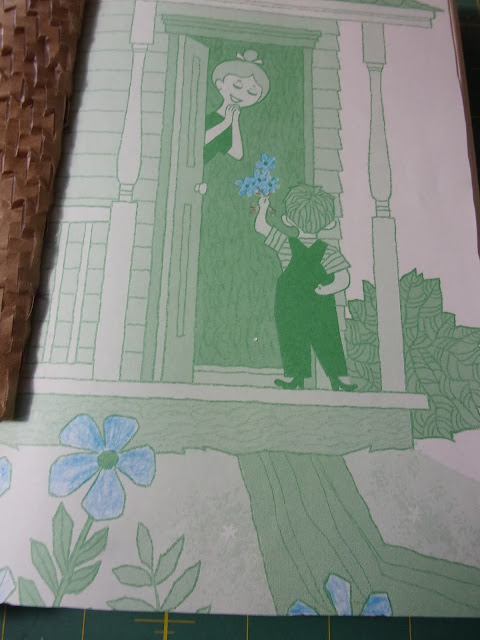 We Have Photos This Morning

Last evening when I wanted to bring photos over for my cast iron post and also for my rock project post only thing I got was a big minus sign instead of a photo. This is the first time this has happened to me, but asking some of you commented this was a Google issue.

I was down to mostly this size of rocks and couldn't place any more in the rocked areas til I got more large rocks up there. So I placed allot of rocks around the base of  the lilac bush down at the end of this wall and walkway. Then I placed allot in this curved area up front and down the side. The way the water flows down this hill, until we are able to get drainage pipes in thinking this will help a bit-at least hold in the soil better

I still had a big pile of odds that were part of the brick and concrete columns that were in the house-so after we ate our main meal I went back out and moved those over to the left of steps and added them to those piles of rocks, to deal with later.

Now this area is ready to amend the soil for spring. Larry wants to add a drainage pipe to this area so need to find out where that is going before I plant next spring I am thinking  I am happy dancin' that is area is now clear of rocks. 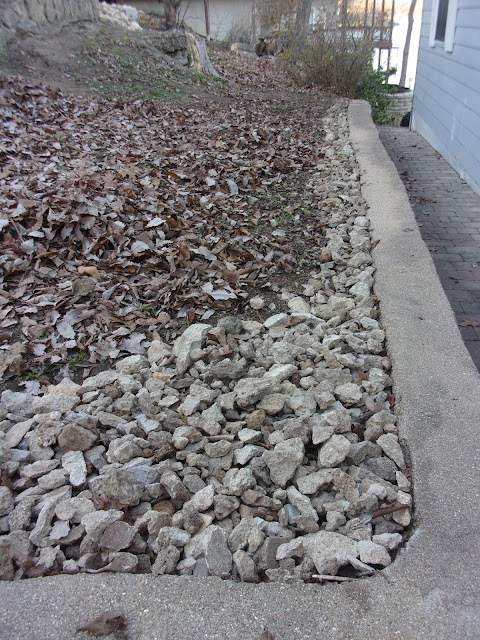 This is a view standing on the steps looking over the rail with a gate that opens up to this area  That blue bucket has served me well, with carrying the small rocks. The bottom is now all split, so no longer holds water, but really helped me out with the rocks. 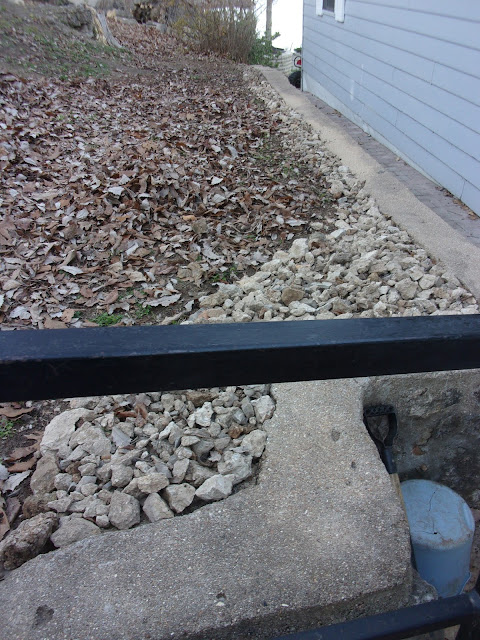 To the right is the area I have been working on these past months, it still needs more large rocks to be place on top of those smaller rocks. To the left that rocked area went allot faster for me, as the rock piles were right there in front. I still need to find someone that will lift up those three large concrete blocks so I can roll them down the hill and stack them down there.
The large copper pot that Larry's uncle drilled holes into, I emptied out to use all the soil that was in it and I am hoping it will sit on top of this old tree stump. 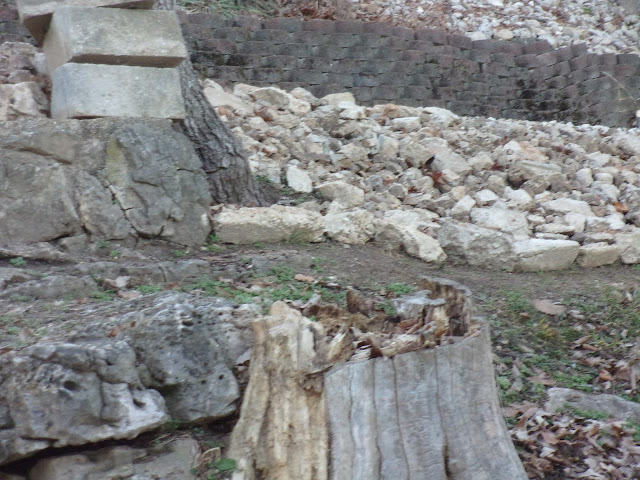 This is a photo below to see both sections I was working on, in front we salvaged some of the brick when we took out those two short columns leading from the kitchen to the main living area-that really opened up things  To the right of those bricks are tomato cages with my bee balm plants that survived and also an echinacea plant.
To the left of those bricks is that large tree stump-I am going to start digging around that tomorrow to get roots exposed and hopefully someone can chainsaw it lose-that's where my cast iron cooking area will go-and I want to build that next year. 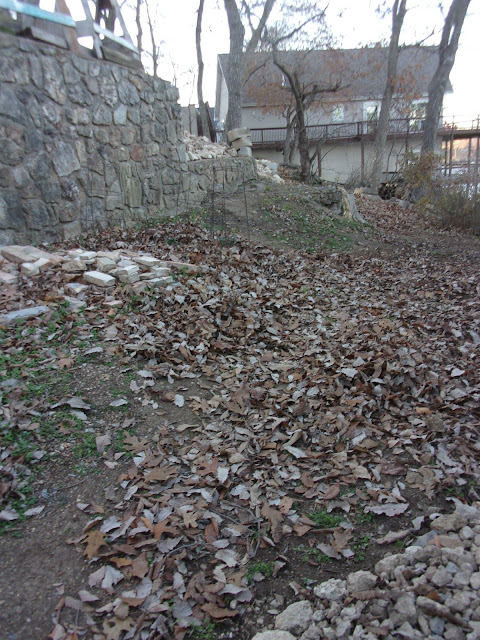 Below photo is to the left of the steps where there are two large rock and gravel piles, and just behind the pallet of bricks for my cooking area 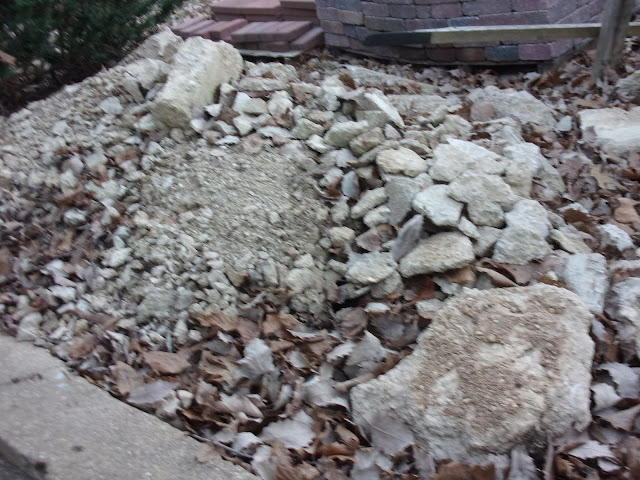 More drainage needs to be done where that pipe is-I got rid of all the weeds in front and to the right of that pipe and placed rocks in that area too So I have moved allot of rocks this summer-smiles  and you can see my palate of bricks for my cooking area and I also brought those bricks to the left from my cooking area I put together at the woods house. Those larger ones are really nice for the large cast iron Dutch ovens with legs. 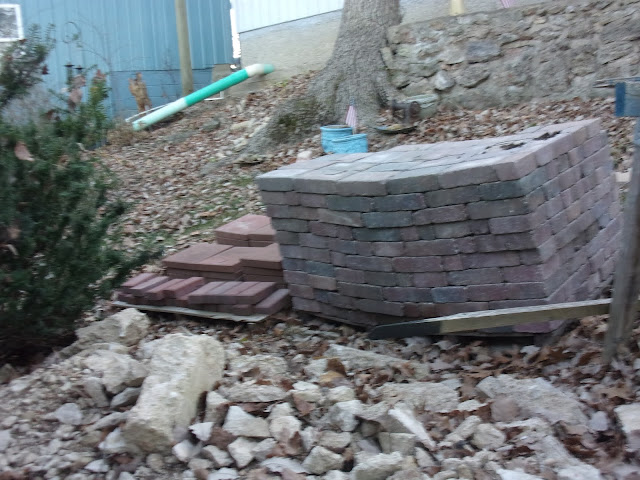 The second pile of rocks and gravel below. All of these rock and concrete piles came from the very thick concrete sidewalk that just made the water flow coming from the top worse-so Larry had a crew get all that up and they laid down the brick path. that was the first few months after we bought our lake house-and then soon after Larry needed a heart valve transplant. So it's been slow going for him since then 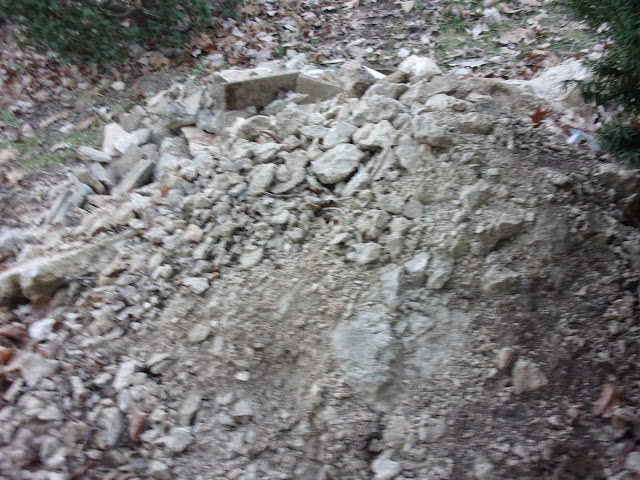 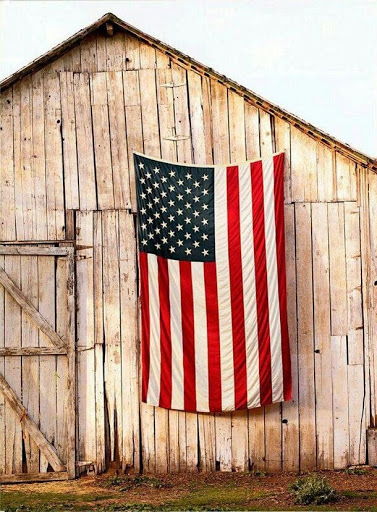 Welcome to my blog where I will be posting about my doings here on the lake in the Missouri Ozarks along with my weaving, spinning, natural dyeing, and my other creative projects. I am an American girl who loves her country and I am a conservative patriot with Christian and Judeo values. I will strive to have this be a positive and uplifting blogging journal taking the hummingbird as my spirit animal-see below link about the hummingbird spirit animal and flag photo above found online 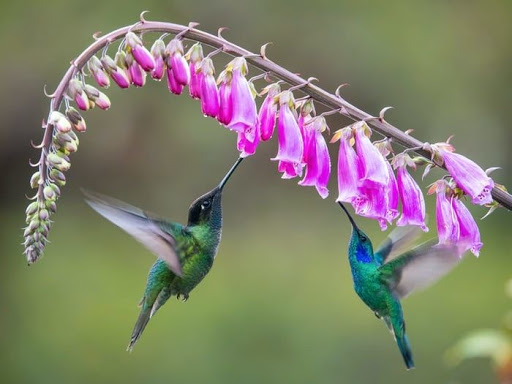 Find me here too

Try It On Tuesday